“You know this is the first time in my life I’ve been able to read an entire paragraph. I want to be able to read to my children!”

“The letters used to be about 6 inches off the page, floating and dancing. Now they are right on the paper and stay still with the right spaces between the words.”

“Before, it took me 3 to 4 hours to prepare my Sunday school lessons. I had to keep re-reading the lesson over and over. Last week I was done in 30 minutes!”

…client comments a week after the program

Here is a list of books I have read in the last 5 months:

“You are very caring and professional as a facilitator. It has been an eye opening experience!! My son cried when it was over. He likes to learn new words now and he likes to sit down and read more, insisting on finishing each time. Thank God I found this program. His special education teacher is amazed at how fast he is learning.”

…comments by the client’s mother

“I read better. I learn how to control my dial. I know how to do every tool. I can balance better and catch the ball better. I can use the dictionary. [This client wanted to play the dictionary games for every break!] I liked the claying and the word games with the dictionary. I’m learning the meaning of more words. I can focus better. Claying the words and the alphabet have helped me the most. I like you. You are a very nice person.”

…client comments at the end of a week’s program

“We checked with a family we had known who struggled with their son’s dyslexia years back to see if they had ever found anything that worked before deciding if our son should complete the Davis program. Their son had completed three different programs/tutorings, and they felt that the Davis program helped him the most… They indicated that had they attended it first, they likely would not have done any other…We met with Susan…Our son connected with her, and I think he felt like someone actually understood him!…Within two days, he told us he wanted to do the program. Teenagers change their minds a lot, but he never changed his mind on his decision to attend Susan’s program.

Our son thoroughly enjoyed Susan’s program. I think he felt understood for the first time in years. His confidence increased a lot during the program and he actually thought it was humorous that he could do many of the tools in the program much better than his parents and grandparents.

Susan is a wonderful facilitator! She had a connection with our son, and he loved the days attending her program. She was very caring and genuine, and so excited when they accomplished tasks. He has nothing but good things to say about Mrs. Smarjesse, and we feel very blessed to have been led to her program for our son.

Mrs. Smarjesse has continued to remain in contact with us post-program. Our son loves to do the modeling and looks forward to one day being able to help others with their modeling. The tools have also helped to bring us together one on one with our son when we are asked to help him with his tools. We are very glad to have a resource for advice with Mrs. Smarjesse.”

…comments by the client’s mother

“Thought I’d drop you a note regarding B. and a huge victory! Just the other day, as we were doing reading for picture at punctuation, something very amazing happened. B. finished a sentence, stopped, and then described it. I asked him to picture what might occur next, and guess what, he did just that. He looked at me with total amazement. What he pictured happened…Guess what, he did it again. He looked at me and smiled again. He was right on target. For the first time in his life, he read more than ‘just the words.’ He started to understand how we all read and how we anticipate what will happen next in a story. He said, ‘Whoa, this is cool.’ Thank you again for giving him the tools.”

…comments by the client’s father

The week after my program was the ISAT test and I was way less confused this time. My reading is easier and the claying keeps getting easier. I’ll see you at the next Saturday ‘Client Claying.'”

…comments by the client soon after the program

“You know this is the first time in my life I’ve been able to read an entire paragraph. I want to be able to read to my children!”

…comments from a client

“It was a learning experience and a lot of fun. The dictionary, the words, and the claying were things I thought I would never do. I read so much better now. We are having fun doing the work that needs to be done at home, too. Have a blessed day!”

…comments by the client a month after the program

Using clay is a fun and creative way to learn!
At Reading Solution of Central Illinois, clients learn how to master abstract words and concepts. 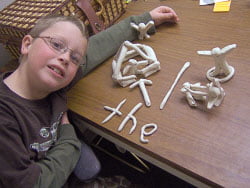 A Reading Solution client has mastered the word the (a definite article meaning: that one which is here or which has been mentioned) using the Davis Symbol Mastery® process. 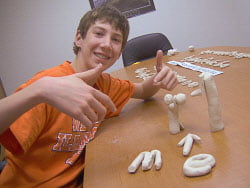 Make a clay model that represents you! 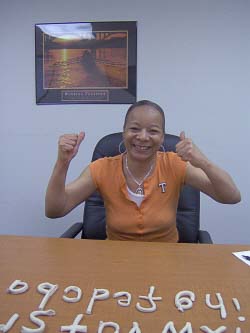 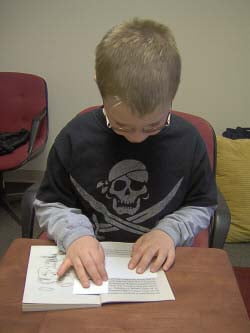 Our Program uses and enhances the Imagination